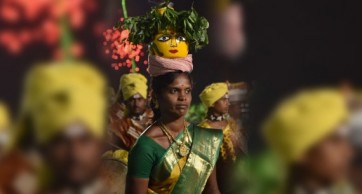 Hyderabad, Sep 20 (IANS) Arrangements are in full swing for the Bathukamma festival, which is set to be celebrated in a grand manner across Telangana from September 25 to October 3.

The main celebrations will be held on October 3 which will be celebrated as Saddula Bathukamma.

He said that as a large number of people will be participating in the festival, elaborate arrangements should be made in a befitting manner.

Bathukamma is a colourful, floral festival celebrated by the women folk in Telangana. It is the state government's official festival and considered the symbol of Telangana's culture.

Ever since the formation of Telangana state in 2014, Bathukamma has been celebrated as the state festival.

The officials have been directed to illuminate important traffic islands and buildings during the festival. They have been asked to undertake improvement of roads, barricading of immersion points, provision of uninterrupted power supply and organise cultural programmes.

Swimmers will be deployed near Hussain Sagar and at all the immersion points as a precautionary measure.

The Chief Secretary has also asked the officials to decorate pillars of Hyderabad Metro and trains depicting Bathukamma festival. Wide publicity should be given in the social media about the festival, he said.

For Sasddula Bathukamma celebrations in Hyderabad, the Chief Secretary asked the officials to ensure provision of logistics like arrangement of small cranes for immersion of Bathukammas, illumination across the banks of Hussain Sagar, police security, traffic control and regulation, temporary toilets, distribution of butter milk sachets, arrangements of first aid facility, deployment of fire extinguishers etc.

Saddula Bathukamma should also be organised in all the district headquarters, he added.

Telangana Jagruthi made arrangements to play the Bathukamma documentary on the big screen.