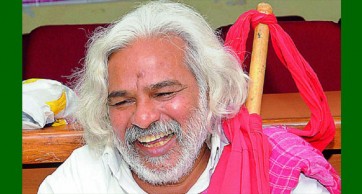 Hyderabad, Sep 8 (IANS) Former Maoist ideologue and revolutionary balladeer Gaddar is likely to join the Congress party ahead of the next year's Assembly elections in Telangana.

He is believed to have responded positively when Congress Legislature Party (CLP) leader Bhatti Vikramarka requested him to join the party and play an active role in politics.

The CLP leader also requested Gaddar to join Rahul Gandhi's 'Bharat Jodo Yatra'. The revolutionary poet assured him that he would join the yatra once it entered Telangana.

Gaddar called on Vikramarka on Wednesday requesting the party to take up the demand of naming the new Parliament building after Dr. B.R Ambedkar.

Gaddar said he would consider the request of the Congress leader to join the Parliamentary democracy system and also contest the elections.

Another Congress leader Prem Sagar Rao, who was also present during the meeting, urged Gaddar to contest for Parliament from the Peddapalli constituency.

There have been speculations in the political circles about Gaddar's moves after he met Union Home Minister Amit Shah in May during the latter's visit to Hyderabad.

The former Maoist sympathizer was understood to have requested Shah to drop cases pending against him in various states.

Gaddar had also hinted at playing an active role in politics before the 2018 Assembly elections.

He had met Congress leader Rahul Gandhi and gone on record saying he was ready to contest the elections against Chief Minister K. Chandrasekhar Rao as the joint candidate of opposition parties.

Gaddar had said that he did not belong to any party but would support any party to end what he calls 'neo-feudalism' in Telangana. Stating that Telangana state was created with the sacrifices of martyrs, he said the change has not come in the state.

Gummadi Vittal Rao, popularly known as Gaddar, was a revolutionary singer and a sympathiser of Naxalism, right from his days at the Osmania University Engineering College during the Telangana agitation in 1969-70s.

The group later became the cultural wing of the CPI(ML) People's War, which merged with Maoist Communist Centre (MCC) in 2004 to form CPI(Maoist).

Gaddar had escaped an assassination bid in 1997. Unidentified men had shot him at his residence on the outskirts of Hyderabad. He had blamed police and then Telugu Desam Party (TDP) for the assassination attempt.

In the first-ever direct talks between then Andhra Pradesh government and People's War in 2004, Gaddar along with revolutionary writers and poets Varavara Rao and Kalyan Rao had acted as emissaries for the Maoists.

During his stint with the Maoist party, Gaddar strongly campaigned against electoral politics and called for a boycott of elections.

In 2017, he gave up Maoism and declared himself Ambedkarite. He announced that he was going to join the political mainstream.

He severed his ties with the Maoists in April 2017 and the same year he enrolled himself as a voter. In 2018, he cast his vote for the first time in his life.