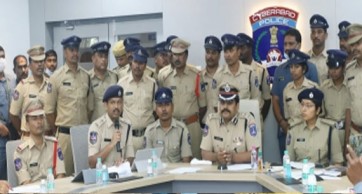 Hyderabad, Aug 29 (IANS) Cyberabad police have busted a gang of inter-state cyber fraudsters and seized about Rs 10 crore, said to be the largest recovery in a cybercrime case in the country.

According to police, the fraudsters had cheated the complainant to the tune of Rs 27.90 lakh.

The complainant had started online trading on 'Market Box' trading application and initially he invested approximately Rs 9,999 and lost the whole amount. Then he again deposited 10 lakh rupees, traded and received Rs 14.9 lakh. Similarly, he continued trading and invested around Rs 62.6 lakh and received Rs 34.7 lakh. In this process, he lost Rs 27.90 lakh. Realising it to be a fraud, he approached the police.

Sri Krishna Kumar of Uttar Pradesh and an accomplice of the main accused used to collect money from hawala traders.

According to police, Abhishek Jain had lost money in trading and he hatched a plan to collect the money from gullible traders through fraudulent trading applications. Pawan Kumar provided bank accounts to the main accused at 10 per cent commission for receiving funds from traders.

Akash Roy was actively involved in transferring funds to bank accounts of merchants from Varanasi and nearby areas, for conversion into cash.

Sri Krishna Kumar was involved in collection of cash for a commission from merchants in Mughalsarai and Varanasi, on the directions of the main accused.

The main accused had developed a trading application: 'Market Box/MB' www.marketbox.in, promoted it on various WhatsApp and Telegram groups. This application is similar to Multi Commodity Exchange (MCX) but is not registered with SEBI.

The Police Commissioner said that there are about 3000 traders registered on this fake app. The main accused lured the customers through promoting and advertising his trading app on various chat groups on different platforms.

For receiving investments from victims, he shared the Merchant Pool Account (MPA) of Pawan Kumar Prajapat maintained by a Jodhpur based Fintech company. This MPA is linked to the market box through API (Application Programming Interface) of Market Box.

After an investment or pay-in from the victim, it is reflected against his balance on Market Box ID using which the victim trades. The investments received from victims are diverted through multiple accounts.