Farmers' forum may be KCR's launchpad for national politics 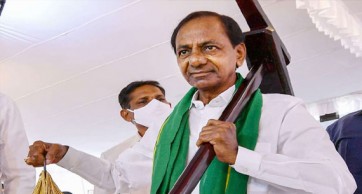 Hyderabad, Aug 29 (IANS) The proposed joint forum of farmers at the national level to replicate Telangana's success in agriculture is likely to be the launchpad for Chief Minister K. Chandrasekhar Rao's foray into national politics.

The two-day discussion he had with leaders of farmers organisations from 26 states here is the beginning of the effort to form a national body, which may later become a national political party with farmers' issues at the core of its agenda.

The deliberations the Telangana Rashtra Samithi (TRS) chief had with farmer leaders at his official residence Pragati Bhavan indicate that he has finally taken the initiative to unite the farmer organisations from across the country to work on the alternate national agenda.

With leaders of farmers unions unanimously adopting a resolution urging KCR to lead a nationwide campaign to unite farmers for struggles, the TRS leader appears set to don a national role.

The farm leaders, who were impressed with the initiatives taken by KCR's government, requested him to lead a nationwide campaign to unite farmers for struggles right from the village level.

On the second day of the meeting on Sunday, leaders of farmer unions urged KCR to prepare the blueprint for the struggles taking into consideration the changed agricultural scenario in the country.

KCR called for democratic agitations and Parliamentary form of struggles on the lines of the agitation for statehood to Telangana to resolve the problems of agriculture and farmers in the country.

Lamenting that farmers did not find solutions to their problems even 75 years after India's Independence, KCR felt the struggles should reach a stage where people who set up obstacles to agriculture would be forced to raise 'Jai Kisan' slogans like those who were opposed to separate state joined the 'Jai Telangana' chorus.

KCR also underlined the need for linking the farmers' agitation with legislatures. He recalled that the Telangana movement became stronger after people expressed their demand for a state through the medium of vote in elections.

He suggested to the farmer leaders to enter politics and get elected to statutory bodies to take up issues of agriculture. He also emphasized the need to sensitize people to vote for farmers.

A bitter critic of Narendra Modi government's faulty agricultural policies, KCR presided over lengthy discussions on how these policies resulted in the collapse of the farming sector.

The farmer leaders agreed that the pro-farmer programmes of Telangana like Rythu Bandhu, Rythu Bima and free power to agriculture rattled the Centre.

They passed a resolution to form a 'National Farmers' United Forum' to replicate Telangana's development in agriculture and farmer welfare policies across the country.

The meeting analysed the development of agriculture, irrigation and power sectors in Telangana and the implementation of farmer welfare programmes and the progress of other agricultural-related projects in the state.

In addition to the initiatives taken to build massive irrigation projects and the welfare schemes for the farmers, KCR highlighted Telangana's success in rejuvenation of old tanks under Mission Kakatiya and drinking water supply to every household under Mission Bhagiratha. He also spoke on the state's social security pension scheme Aasara pensions and other schemes.

KCR told the farmer leaders that as compared to the US, China, or any other country, India was abundant in water, land, and human resources. He pointed out that 40 crore acres of cultivable lands in the country needed 40,000 tmcft of water, and that 10,000 tmcft water was enough to fulfil the drinking water needs of the entire population

He called for a debate at the national level on how Telangana, a state created only eight years ago, succeeded in ensuring 24-hour round the clock electricity supply to all sectors, free and uninterrupted supply to farmers and drinking water to every household.

KCR provided the statistics to show how Telangana ramped up its area under cultivation and increased the production. He slammed the BJP-led government at the Centre for what he called targeting the states lending a helping hand to farmers.

The TRS chief had long been raising these issues but this is the first time that he hosted a meeting of farmer leaders from across the country to discuss the issues and mooted the idea of floating a national body to fight on farmers' issues.

Political analysts say that KCR is now likely to expedite the process of consultation with other stakeholders from across the country to come out with an alternate agenda for the nation.

On several occasions, the TRS leader expressed his ambition to play a key role in national politics to bring a qualitative change in the country.

KCR has also been stressing that his efforts were not aimed at bringing a few political parties together to form a front but he wants to see a qualitative change with an alternate national agenda. He repeatedly asserted that he would be working to garner support from all sections of people with debate in different forums.