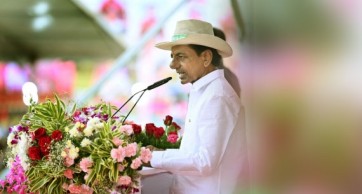 He declared that as long as he is alive, he will not let Telangana die. He called for safeguarding the states from forces inimical to the peace and harmony in the state.

The Chief Minister cautioned the people of Telangana that if religious madness spreads, this will undo all the progress achieved over the last eight years and the state will again slip into the problems faced by it in united Andhra Pradesh.

KCR, as the Chief Minister is popularly known, was speaking after inaugurating integrated district Collectorate in Rangareddy district.

He urged people to drive away selfish, insane and fanatic forces and cautioned them that if deceived they will suffer. He advised intellectuals, artists and youth to be careful.

"Progress is possible only with peace and unity. If we become intolerant we will suffer with curfews and bandhs," he said. Citing the example of neighbouring Karnataka, he said after the row over Hijab and Halal, Bengaluru, known as Silicon Valley of India, suffered, and is now lagging.

KCR voiced concern over the developments in the country and said some elements are creating hatred.

"Is PM Modi not happy with the highest post in the country? What else he wants? Why is he making cheap comments in peaceful Telangana?" he asked.

He also slammed the Modi government for conspiring to topple state governments in Tamil Nadu and West Bengal.