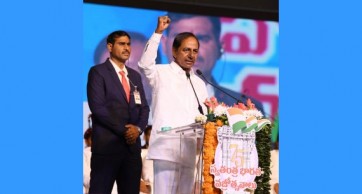 Hyderabad, Aug (IANS) Telangana Chief Minister K. Chandrasekhar Rao on Monday alleged that conspiracies are being hatched to create unrest in the country through divisive politics.

He advised the intelligentsia to speak out on what is happening in the country to thwart the attempts to create unrest. He said it was not proper on part of intellectuals to stay oblivious to the disturbing trends.

Speaking at the closing ceremony of the diamond jubilee celebrations of India's independence at L. B. Stadium here, KCR, as the Chief Minister is popularly known, stated that the aspirations of the poor remain unfulfilled even 75 years after Independence. "Downtrodden sections are still being ignored. There is a feeling among various sections of the people that fruits of independence have not reached them," he said.

The Chief Minister observed that despite having all natural and human resources, the country has not achieved the desired progress.

He said it was the responsibility of today's generation to ensure that the country marches ahead on the path of progress without any discrimination on the basis of caste and religion.

KCR said the state government organised various programmes on a daily basis during the two week-long celebrations to inculcate patriotism and the spirit of nationalism in every family.

He pointed out that Telangana achieved the honour of organising a mass recital of the national anthem. Over one crore people participated in the programme.

KCR said at a time when some forces were insulting father of the nation Mahatma Gandhi, the state government organised screening of the movie "Gandhi" in cinema theatres across the state. Stating that 22 lakh children watched the movie, the Chief Minister said even if 10 per cent were inspired by Mahatma Gandhi, they can bring a big change in the country.

At the glittering ceremony, the Chief Minister hoisted the national flag and paid floral tributes to the statue of Mahatma Gandhi. He also felicitated achievers in various fields like sports, literature, culture, and social service.

Ministers, MPs, state legislators, other public representatives, government officials and others participated in the ceremony.

Performance by singer composer Shankar Mahadevan, drummer Sivmani, a qawwali by the Warsi brothers and dance by Padmaja Reddy and team entertained the audience.