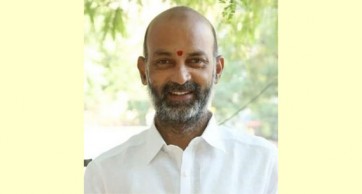 Hyderabad, Aug 23 (IANS) President of the Telangana unit of the BJP, Bandi Sanjay, was arrested and his attempts to sit on protest were thwarted by the police on Tuesday.

The development came ahead of his proposed sit-in protest in Jangaon district, against the previous day's police action on his party workers.

After BJP activists stepped in to prevent police from arresting Sanjay this morning, the situation turned tense. However, police deployed in large numbers managed to take the BJP leader away even as his supporters tried to block the path at several points on the route.

Over the last few days, the BJP in Telangana has been targetting TRS leader and daughter of Telangana Chief Minister K. Kavita over her alleged involvement in the liquor policy controversy that has engulfed the AAP government in Delhi.

On Monday, police had booked several BJP workers under various sections after they had sat in protest outside Kavita's house over the issue.

In response, Bandi Sanjay had announced his protest on Tuesday and had arrived at the spot. But police arrested him before he could begin his protest.

Kavita had on Monday denied any wrongdoing and threatened legal action against BJP leaders in this matter.