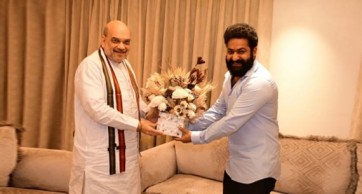 The meeting took place over dinner after Shah reached the hotel from Ramoji Film City (RFC), where he called on media baron Ramoji Rao.

"Had a good interaction with a very talented actor and the gem of our Telugu cinema Jr NTR in Hyderabad," Shah tweeted after the meeting.

Though the purpose of the meeting was not clear, the union minister is believed to have requested the meeting after he liked the actor's performance in the movie 'RRR'.

Amit Shah was in Telangana on Sunday to address a public meeting in Munugode Assembly constituency to kickstart BJP's campaign for by-election.

The meeting sparked speculations in political circles in both the Telugu states and it comes amid BJP's efforts to strengthen its presence in both the states especially in Telangana, where it sees a realistic chance to win Assembly elections scheduled next year.

Junior NTR had campaigned for N. Chandrababu Naidu-led TDP in 2009 but stayed away from active politics. Despite speculations, he did not campaign for TDP in 2014 and 2019.

Junior NTR, who has acted in about 100 films, is one of the top actor's of Tollywood and enjoys huge popularity in both the Telugu states.

He is son of N. Harikrishna, a former Andhra Pradesh minister and former Rajya Sabha member.

Junior NTR's paternal aunt Daggubati Purandareswari is a leader of BJP while his uncle and well-known actor N. Balakrishna is a TDP MLA in Andhra Pradesh.