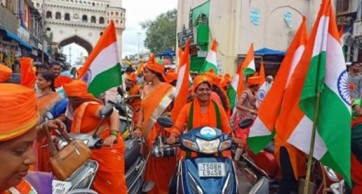 Hyderabad, Sep 15 (IANS) Women leaders and workers of the BJP on Thursday took out a bike rally from Bhagyalaxmi temple at historic Charminar as part of Hyderabad Liberation Day celebrations.

Holding national flags and raising slogans, the participants on motor bikes marched from the historic monument to the Assembly where they offered tributes to India's first Home Minister Sardar Vallabhbhai Patel.

Union minister for tourism and culture G. Kishan Reddy led the rally, which was organised by the BJP Mahila Morcha.

Kishan Reddy and other BJP leaders garlanded the statue of Sardar Patel and paid homage to him.

Union ministry of culture is organizing Hyderabad Liberation Day celebrations on a grand scale to mark 75 years of the accession of erstwhile Hyderabad State with the Indian Union.

The bike rally was part of the year-long celebrations which kicked off on Wednesday with Telangana Governor Tamilisai Soundararajan inaugurating a photo and art exhibition.

The exhibition showcases archival images associated with the erstwhile Hyderabad State and its unification with India on September 17, 1948.

The main event will be held on September 17 at Parade Grounds in Secunderabad where Union Home Minister Amit Shah will hoist the national flag and review a parade.

Without naming anyone, he remarked that individuals holding Constitutional posts were also participating in the attempts to vitiate the atmosphere.

The government of Telangana has announced that the occasion will be celebrated as national integration day. Chief Minister K. Chandrasekhar Rao will hoist the national flag and address the people to launch year-long celebrations.

The state government also plans rallies by students, youth and women on September 16. A big procession is also planned in Hyderabad the next day culminating in a public meeting at NTR Stadium. The public meeting will be addressed by the chief minister and other leaders.